In Issue Eleven of Dime Pulp, A Serial Fiction Magazine, Better Than Dead, a 1940 serial detective fiction prompted by the illustration of a vintage Black Mask cover featuring the hapless Lackland Ask holed up after the massacre in the Heights and looking for a way to extricate himself from a mess of murder. But first, a romantic interlude..

The Last Resort, A Lee Malone Adventure aka Tales Of A Long Legged Snoop, picks up the pace toward its concluding chapters as the former international beauty and now reporter for The Corkscrew County Grapevine, is put in the position of being auctioned off to the highest bidder in a sex slave auction and has to resort to using her secret weapon, femme fou.

And beginning this issue, we are pleased to start the serialization of Pat Nolan’s On The Road To Las Cruces, Being A Novel Account of the Last Day in the Life of a Legendary Western Lawman, a work of fiction tethered loosely to historical fact. It is as much a retelling of some history as it is how such a retelling might come about, and represented in the manner of a tall tale, the deadpan details of a crime story, melodrama, and a conspiracy to murder.

Dime Pulp continues its crime spree with the serialization of three full length novels, The Last Resort and Better Than Dead, A Detective Story, as well as On The Road To Las Cruces.

If you’ve made it this far, go ahead and follow the links below to reading entertainment with the serial contents of Volume One, Number Eleven

Deep in the redwood wilds along the Corkscrew River, someone is shooting neighborhood dogs. The year is 1985 and Lee Malone, former fashion model, queen of the runways from Paris to Milan, once dubbed the most beautiful woman in the world, now a part-time reporter for The Corkscrew County Grapevine, is looking for a story to sink her teeth into. When Lee finds the owner of Kelly’s Seaside Resort brutally murdered, it leads her on an adventure that includes a mysterious gray van, another murder, extortion, pornography, sex slavery, and a shadowy organization of militant feminists known as SAPHO.  In the process, Lee Malone’s notorious past catches up with her. 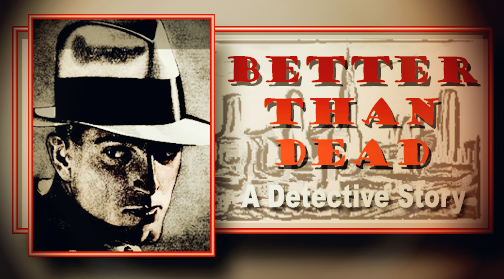 In late February of 1908, a one-time drover, buffalo hunter, saloon owner, hog farmer, peach grower, horse rancher, US Customs inspector, private investigator, county sheriff, and Deputy US Marshal set out from his adobe home on the mesa above Organ, New Mexico accompanied by a young man in a black buggy on the journey to Las Cruces.  He would never arrive.  This is the story of that journey, a novel account of the last day in the life of a legendary lawman.

This site uses Akismet to reduce spam. Learn how your comment data is processed.